Escalation: Why I Love A Game That Constantly Tops Itself 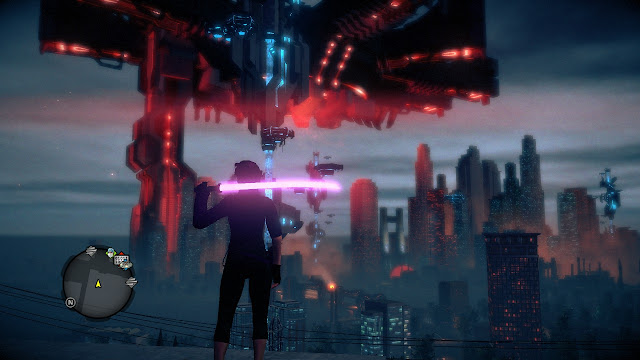 So I finished Saints Row IV. It was really good. Probably my favourite in the series right now. The first big budget game I've preordered in forever that felt 100% worth it.

I have a bizarre fascination with the Saints Row series. I adore it unabashedly. I obsess over it. I would play any game in that series over and over if it weren't for the fact that I have hundreds of other video games to play instead. I gritted my teeth through the glitches and bugs of 2, I tracked down a used copy of the first, I own way too many copies of The Third thanks to Humble Bundles and PS Plus and I just finished the fourth in less than 36 hours. I love these games. Sure, they're a bit trashy and silly. I'm well aware that the games are 99% pandering. Normally I hate pandering, but for some reason it just works for me.

And that reason is escalation, which segues nicely into the first of many articles in which I explain what I like in a video game. I figure it's best to find reviewers and critics with a similar taste to your own, so this is a fun way to keep you in the loop. I'm purposely avoiding boring answers like graphics or story, instead focusing on fun words.

One of the best things a video game can do, in my mind at least, is constant escalation. Many probably disagree with me. A proper narrative should have peaks and valleys. Constant escalation is just exhausting. I say fudge that.

My fifth favourite video game of all time is Metal Slug (if we're getting technical, it's the Metal Slug Anniversary disc, so all seven can collectively share the fifth slot). I'm not big on arcade games. I don't really care for Contra. On paper, Metal Slug shouldn't appeal to me at all, but it does. Part of this comes from the 2D graphics, which are incredibly detailed and varied and really strengthen the game. Pixel art isn't an inherently bad thing, but these days it is often used lazily when systems and developers are capable of doing so much more with 2D art. Metal Slug, in my mind, is the "right" way to do pixel art—lots of variety with an emphasis on animation. But I'm digressing.

The main reason I like Metal Slug so much is escalation. The game begins like any other arcade shooter—you're in the jungle, you're rescuing prisoners, you kill Nazi expys, everything is great. It follows the usual progression of a Contra-like game, and then ends. The second begins much in the same way, but decides to start from the level of crazy in the first game's final level and work from there. You're in a desert this time when suddenly mummies pop up. Then you're fighting the army of the first game when suddenly aliens! Now you're in a desperate struggle for the last of humanity. 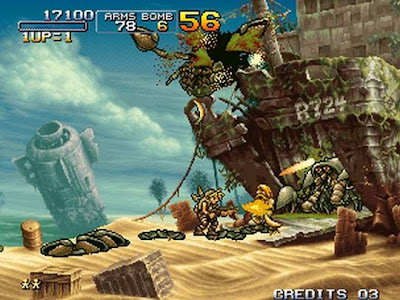 This goes on in the third game (crab people) the fourth game (cyber clones) the fifth game (Lovecraftian demon monstrosity) and the sixth (even bigger and scarier aliens). Every setpiece and every boss is made to be even crazier than the last. It constantly surprises you. Nothing about your goal changes (run to the right, shoot) but just when you think a level couldn't possibly be topped, the next one does it. This is why the Metal Slug influenced Intrusion 2 is one of my favourite indie games, but Mercenary Kings didn't quite live up to my hype. Intrusion 2 has you infiltrate a base, ride a dire wolf and then fight a mech that just. won't. die. Mercenary Kings has you, er, grind parts for weapons? It intrigues me, but doesn't convince me to sing its praises.

There are other ways to do this escalation. In fact, RPGs often do it well, albeit unintentionally. I recently and properly finished Neverwinter Nights and its expansions. The two expansions (which are linked together and follow the same character) demonstrate how satisfying leveling up can be. When I loaded the first expansion up, I walked into a barn and was killed by a rat. It took a few reloads and a bard song, but I eventually managed to kill it. Flash forward several hours and about thirty levels and now my bard is a tiny half-dragon god, fighting an archdevil mano a mano, with a scythe dripping acid and a mask that absorbs the smiles of children for power. It's not quite the same kind of wacky escalation you'd find in Metal Slug or Saints Row, but it's still a constant progression of power that leads to absurdly awesome heights. There's a reason I never like to start D&D campaigns at high levels, because power is so much sweeter when you know what it's like not to have it.

Saints Row, as a series, does escalation perfectly. Start right at the fourth game and you'll be lost in a sea of Aerosmith, headbutting and gratuitous nudity. Start from the first, and you see the progression of your character from silent, no name NPC to angry god-king breaking necks with your mind while dancing the Safety Dance. Some might bemoan the loss of "realism" or dramatic depth, but I revel in the constant game of chicken the developers play. "Can they top themselves again and again?" I wondered as Saints Row IV unlocked. Yes. Yes they can.
Posted by Colin Brown at 17:00