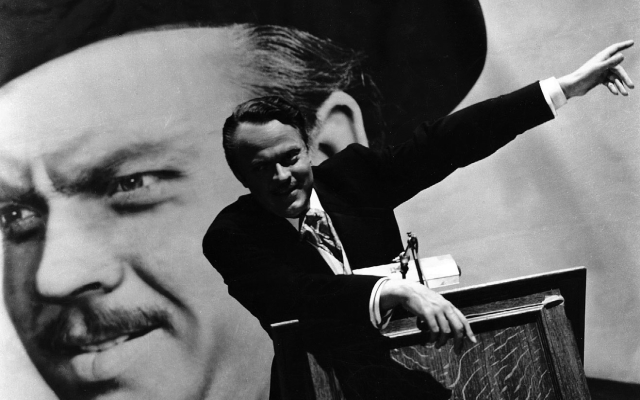 Today I heard about a website called The Citizen Kane of Video Games and it is hilarious.
Noted Indie Developer Mike Bithell was the first to direct it to my eyeballs via tweet, after which it prompted a few silly arguments by all the Noted Indie Developers I quietly stalk on Twitter. Some people really hate the constant comparison of video games to movies, and the idea of "video game's Citizen Kane" embodies All That Is Wrong with video game criticism. Some people really hate that some people really hate this comparison, since it usually isn't intended in a malicious way. It's just a quick and easy to grasp way of conveying the idea that this game will be revered across all mediums for all time.

I like to think I fall outside of this snowglobe of a debate like the special little snowflake I am. Don't get me wrong, I despise the idea of a Citizen Kane of video games. I just hate it for my own special snowflake reasons, namely that the people who keep using it are using it in the most spectacularly wrong ways.

Let's go back to that wonderful little Tumblr. Among the entries since it started just three days ago, we have Metroid Prime, Mass Effect 2, both Grand Theft Autos 3 and 4, Bioshock Infinite, Final Fantasy VII, Ocarina of Time, Tony Hawk Pro Skater (say whaaaat?), Metal Gear Solid 2, Xenogears, Killzone 2 and The Last of Us. I've played all but the last four of those, and I liked every one I did try. The majority of those games are stone cold classics, absolutely. But I could probably name at least another couple hundred games I would consider "classics" by my very agreeable standards, and there are at least as many classic movies that came out before the 1950s. Slapping the Citizen Kane label onto every game that impresses you is, to me, just a lazy way to sound smarter than you would if you just said "I liked it" instead.

Honestly, I would like to know how many of the people quoted on the Tumblr have actually seen Citizen Kane. I swear that's not me trying to question their credentials or be elitist or anything, because not watching Citizen Kane is a pretty understandable state of being. I consider myself a film buff, but I only saw it for a university class and I imagine I probably would not have seen it otherwise to this day. Most people don't pop down to the video store to rent Citizen Kane on a whim. It's not on Netflix or other such easy services. It's also a pretty challenging movie to sit through if you're not entranced by its historical worth. I mean, I straight up didn't like it much. I was bored in places. I absolutely respect its place in cinema history, but that doesn't mean I like the damn thing.

(This is, of course, utter horseshit. There were many films that came before Citizen Kane that fit my definition. I would probably point to A Trip to the Moon as the earliest famous film to fit this definition. The Execution of Mary, Queen of Scots is the earliest film I can think of that uses a jump cut, so that is probably an even better choice. But this is semantics, because Citizen Kane is the one that people keep using, therefore it's the example we need to work with.)


In the decade or so before Citizen Kane came out, the majority of movies were just, more or less, plays on film. This was because of the popularity and relative cheapness of theatre adaptations, the number of Hollywood staff who got their start in the theatre and the way technology hadn't quite progressed enough to do experimental camera movements and blocking (sound in particular was hard to capture, usually necessitating a very large plant in the middle of most scenes to conceal the mic). Citizen Kane, despite Welles' background in theatre, threw most of this stuff out. It used crazy blocking to pack the frame with detail, allowing for shots that go on and on by zooming in and out to reveal more details just outside the frame (the clip embedded above is the most famous example). It used new angles and tilts to capture scenes in new ways—I mean, think about ceilings. Pre-Citizen Kane, it was very unusual to see the ceiling in a film, because everybody filmed scenes at eye level while Citizen Kane used low angles to make Kane look more imposing. That's the kind of thing I'm talking about, where Citizen Kane used film to expand on its story in a way that a play could not do.

(You should really substitute "story" here with another word, but I don't feel comfortable deciding what one. A sculpture doesn't tell a story per se, but the Citizen Kane of sculptures would convey its message or intent or idea or whatever in a way that, say, a painting could not. Since I don't know much about media outside of films and games I tend to default to the admittedly problematic term of story.)

The point is, Citizen Kane (sort of) marked a point when films began to properly use the medium to do things that only film could do. So, ideally, the Citizen Kane of video games would be a thing that tells its story in a way that other media (including film) could not. If we look at the games I listed above, pretty much all of them fit this comparison. Mass Effect 2's structure wouldn't work as a film. Kojima's famous tricks wouldn't work half as well if Metal Gear Solid 2 wasn't a game. The world of Ocarina of Time was so mindblowingly huge to explore back in the day, but good luck capturing the feeling you get from collecting pieces of heart on celluloid. But right from the earliest games because of technical limitations, nearly every video game can fit my definition for the Citizen Kane of video games. Nearly every game in existence uses its medium in a way that others cannot emulate because of the sheer interactivity. Cinema needed a Citizen Kane to push the medium away from simple big budget theatre rip-offs. Games don't have the sames problems that necessitate a Citizen Kane to come and save it.

My particular pet peeve is the most recent Citizen Kanery being bandied around for Bioshock Infinite and The Last of Us (which dovetails with what Misters Del Toro and Lucas have to say on video games). It's demonstrated beautifully by that Empire quote above, i.e. the way people are quick to point out our industry's Citizen Kane moment. Obviously Empire doesn't share my innovative and clever definition of the Citizen Kane of video games, falling dangerously close to that irritating trend of "good=Kane" that bugs me. However, there's another interpretation here, and maybe that's what Empire is going for.

A lot of journalists and critics bestowed Bioshock Infinite and The Last of Us with the lofty titles of Citizen Kanes for more progressive reasons. The idea is that these two games represent the pinnacle of video games, and in theory they should be our ambassadors to the mainstream. It implies that these will be the games that rush our niche hobby into the limelight of acceptance, forcing all those protesters and naysayers to admit that video games are more than just violent gimmicks.

But it's such a ridiculous idea. There are examples of a whole medium getting defined and pushed to acceptance by a single work—Mr Del Toro points out A Contract With God and graphic novels, though I would argue Maus was the one that made it mainstream. But Citizen Kane did no such thing. It was well received critically, but it lost money thanks to the rampant bullying by Kane-inspiration William Randolph Hearst. But all that aside, films were pretty gosh darn mainstream by 1941. And films would continue to be shit all over by naysayers and protesters well after Citizen Kane. You're grumped out about a possible tax on violent video games? At least video game designers aren't being dragged up in front of a panel to be accused of treason. Not to mention that most of this is moot, since it's impossible to call video games a niche in 2013 with a straight face. We're already mainstream! Acting like we're not just makes you look weirdly self conscious.

And, let's be honest, if any game single-handedly brought gaming to the mainstream, it was Wii Fit. Not whatever mind blowing shooter we're arguing about at the moment.

Film wasn't an overnight thing. There is no one film that single handedly legitimized cinema. It was a group effort by lots of films and filmmakers catering to lots of different tastes and ideas. Charlie Chaplin films had just as much of a role as Birth of a Nation in establishing cinema as a legitimate art. Being on the lookout for the One Game that everyone ever will like is pointless. Citizen Kane did not get where it was by aiming for the broadest appeal. If anything, we need to double down on the creative, the unusual, the nontraditional, the weird, the specific. We need to see as many creative people as possible doing as many interesting things as possible without being hamstrung by publisher notes and demographics and Market Viability.

This isn't a pro-indie rah rah rah message, because big budget cinematic games have their place just like summer blockbusters have their place beside weird black and white movies about sensuality and fish or whatever. This is just me saying that rushing to crown the video game Citizen Kane is searching for a turning point that will never come, because we don't need it. Let's just make lots of great games to fit every taste possible.

Something something sled joke.
Posted by Colin Brown at 01:34