Press A to Atrocity in Spec Ops: The Line 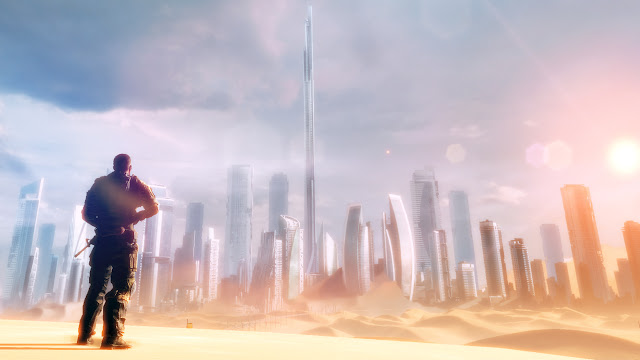 I just beat Spec Ops: The Line a few hours ago. I know everyone already fawned over this game back when it was, you know, relevant, but a case of writer's block and some niggling doubts about its effectiveness made me decide to throw some words together on it. Here are my first impressions.

Overall, I thought the game was a tremendous pair of middle fingers, each one pointed directly at the writing of Call of Duty and Battlefield respectively. I'm not a pearl clutching type who is opposed to shooting dudes in a video game, but I'm getting to the point where "realistic" and meaningless violence gets to me. I don't get grossed out as I mow down zombie after zombie in one of the Walking Dead's few action scenes. I don't bat an eye at That One Scene from Bioshock Infinite, because it's an absurd made up place that is full of fictional racists. I'm totally desensitized to plowing over pedestrians in Saints Row, because I'm riding a jet bike while dressed as, I don't know, a panda or something. I don't even get overly icked by the hundreds of murders over treasure committed in Uncharted, because that's how all the proper pulp adventure novels roll, really. But as a pretty pacifist individual, the closer a game gets to real life killing the less I want to play it.

Spec Ops agrees with me, and that's why I... well, I didn't enjoy it but I appreciated it. Sure, there are some scattered clunky bits. The controls and AI aren't quite... all there like they would be in a straight military shooter with a higher budget. Some bits get frustrating because of it. But it's a slight blemish in what is otherwise a delivery device for the game's story and message. "Are you enjoying shooting these bad guys?" Spec Ops whispers in your ear. "Do you like it when dudes shout things about flanking and Delta Team at you?" it coos before smacking you on the back of the head for having fun. "No," it says, sternly. "Bad."

But there's one thing kind of bothering me about the ending of the game and the overall presentation, which is what prompted this post. Obviously there will be MAD SPOILERS FOR RIGHT UP UNTIL THE FINAL SECOND OF THE GAME so only skip past the break if you've finished the game for yourself. 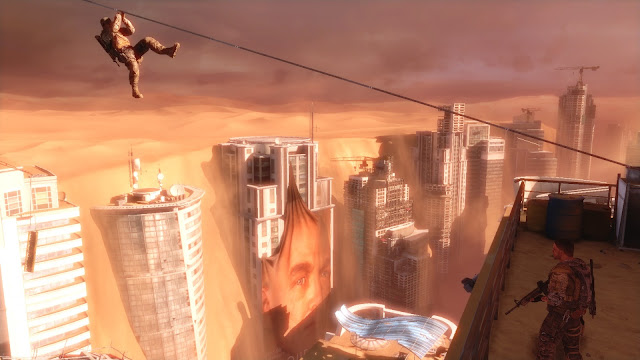 The problem I have with Spec Ops is that the message of the game is kind of bullshit. Over and over we hear Captain Martin Walker state that he "didn't have a choice." Which is seemingly true, throughout the game, until you get to the ending. At that point (last warning for spoilers) Joseph Konrad explains that Walker has been hallucinating for most of the game. Walker does this to push the blame onto Konrad, his personal Durden, for all the awful stuff he does. The more bad stuff Walker and gang did by "helping" everyone, the more he blamed the already dead Konrad, and the further they pushed into the city to get revenge causing more horrible horrible war crimes. "So really," the game gloats, "you did have a choice! You could have just walked away!"

It's a clever twist, because most people going into Spec Ops thinks that the game is going to be an avalanche of failure and sadness that you're helpless to stop. The Walking Dead does this to great effect; every choice leads to more awfulness, so your choices are essentially a game of trying to mitigate how shitty you will feel. Spec Ops starts like this ("Will you save the civilians or the agent?" it crows in one early bit) but eventually the game rips the rug out from under your feet to point out that, no, dummy, you weren't helpless to stop it at all. Sure, Dubai was boned from the start of the game, and there's plenty of murdered civilians that didn't die at your hands personally, but you instigate most of the awful things that happen over the course of the game. It's a powerful message, except for one slight problem. In order to show you that your actions have consequences, you're forced into doing actions. Wait, what? 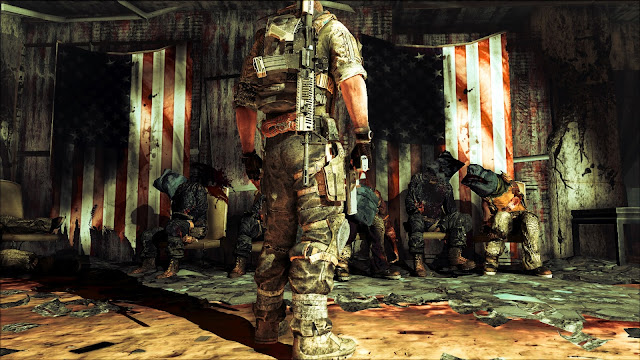 There's an infamous moment in the unfortunately subtitled Medal of Honor: Warfighter where the game snaps your crosshairs to some guy's noggin and tells you to pull the trigger. There is no explanation, no agency, no way to move your crosshairs or disobey. The game is essentially grabbing your controller and removing all but the press of a button from your actions. Spec Ops doesn't get this heavy handed, but there are plenty of situations where the only reason your character does some atrocity is because the game and the plot won't progress otherwise.

Let's talk about the phosphorus bit. I'll refresh: Walker and his buds need to get through "an army" of dudes, and unlike every other army of dudes that you've fought head on up to this point, the game decides that this time you'll use chemical weapons. Enter the obligatory air strike scene from most military shooters as you dump canister after canister of whatever was in the Ark of the Covenant, only this time you find out later that you just directly murdered a whole bunch of civilians.

The trouble I have with this scene is that even before The Big Twist was revealed, I was pretty against the idea of melting dudes. You could sneak across. You could take another route. You could get disguises. It's not like Walker and crew were in a rush that necessitated the quickest and most war crime laden of routes. But the only way to leave the scene was down some conveniently placed ropes, and I could push A all I wanted but the game would have none of that until I did my duty and melted children.

It's especially ironic that during the scene, your pal Sgt. Lugo keeps shouting at you that "there's always another choice!" when Walker acts like their hand is forced. He's right, in that conceptually there is another choice, but he's also wrong, because the game doesn't work if you don't commit atrocities. 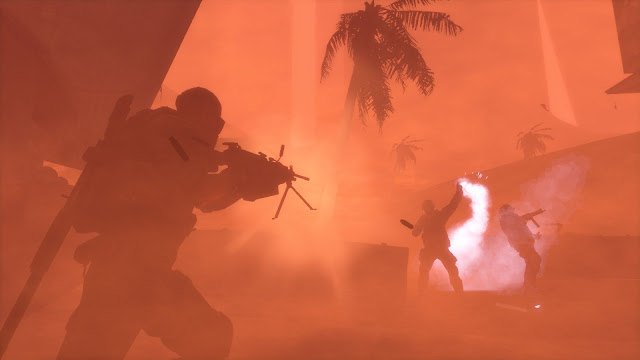 For me, anyway, this habit of forcing you into these actions negates a bit of the ending's sting. Konrad Durden is trying to get across that you, as Walker, are a horrible person because you repeatedly acted as though your hand was forced when it wasn't. But it's a little to easy to convince yourself that your hand really was forced, mechanically. In the last scene of the game, when deciding whether or not to shoot yourself, I ultimately didn't. I feel like it would fit the narrative better if Walker died, and I was going to let it happen, but deep down I felt slightly cheated enough to let Walker live. Even if "Konrad" hadn't actually forced his hand, some employee at Yager did. Of course, there's an author behind every story, but when the story is interactive, it's a fine line before the author's intention collides with your own to seem unfair.

I should be fair, in that the very thing I'm criticizing is kind of genius if you take it as a mechanical interpretation of Walker's insanity (i.e. echoing his "we don't have a choice" mentality in the game's programming itself), but I still feel like there would be better ways to get the "military shooters are monstrous" message across without almost shoehorning it in. For example, during the protracted battles of the last third of the game, I was on the lookout for some kind of insidious twist. I kept expecting to suddenly find out that the soldiers I was fighting were not members of the rogue 33rd Division but Delta Force back-up, or something, and I was just too desensitized to notice. That would be insanely controversial, in fairness, but it would play to the mechanics much better. Instead of showing Walker doing Bad Things in what is basically an interactive cutscene, allowing the player to keep doing what they've been doing all game before showing them how well and truly fucked up their self driven actions were would have, in my opinion, been a bit more clever. In fairness, "normal" military shooters also often force your hand into atrocities, and it's more than likely this whole angle is just another aspect of Spec Ops' deconstructionist nature. It just didn't quick click for me, I suppose.

But still, Spec Ops is, if anything, a first step. Even despite my slim misgivings, I like the game a lot more than it sounds, because it's still a fantastic deconstruction of the military shooter genre. It's clever and surprising and I can't believe it got made in the first place, but I'm glad it laid the ground work for some other video game to come along and be even more clever.